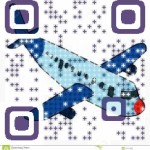 Tomorrow I’ll be landing in Beijing, the capital of China and one of the most exciting destinations that I can think of. Thousands of years of history, the Great Wall and exotic food as well as abundant high-tech industries – Beijing has it all. I can’t wait to see the Great Wall snaking between the mountains, taste the famous Beijing Duck dish and tour the Forbidden City. I’m also curious to see what QR Codes, whose success is hotly debated in the West, are like in China which is renowned for being one of the QR Code capitals of the world. As I press my face to the window of my taxi on the way to the airport, I think back at the uses for QR Codes that I’ve seen at home and wonder what will be similar and what will be different.

Most QR Codes that I’ve seen appear innocuously in the corners of unsuspecting objects, such as tags on jewelry, cards in Starbucks and posters in shops. As part of my profession, I’m in the habit of being on the lookout for QR Codes and scanning them every chance I get, but many people around me seem to be oblivious to them. When I point them out to my friends, they often act surprised and say that they didn’t notice the code, usually because it’s tiny and pushed into the corner of the advertisement but also because of the simple fact that they are barcodes– an object we are trained to ignore. But sometimes I’ve seen posters and advertisements in which the code is strategically placed within the design where you can’t miss it, and that tends to draw a lot more interest from the crowd. And when the results are merged with an image like with Visualead’s Visual QR Codes – people seem to get a lot more excited about scanning the codes, especially if it’s clear that they will be rewarded for it with a coupon or discount.

But China is a whole different story! While people in the West at times don’t seem to be aware of what they can gain from scanning a code, the Chinese are well-versed in the art of scanning. Chinese companies have taken their codes to whole new level with what they offer their customers – from payment methods, to product authentication and marketing stunts – they’re the pioneers of the QR Code frontier. So I can’t help but wonder what exciting codes China has in store for me – stay tuned for a report from Beijing 🙂