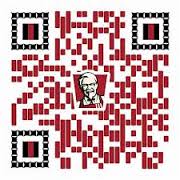 By now, it is possible that you all know what QR codes are. There can be a few people who still do not know exactly what QR codes are, and for their sake, here is a brief definition: quick response codes, commonly known as QR codes are 2d bar codes that were invented in the 1990s. These codes were being used in car parts manufacturing industry in Japan. Back then, QR codes were being scanned using large bar code scanners.

As the years have passed, the use and popularity of QR codes has been on a steady raise. QR codes are not only being used in Japan in the car parts manufacturing industry, but they are also being used in countries across the globe in many other ways.

To some people, when they think of QR codes, the first thing that comes to their mind is a maze of black square boxes that are placed ona white background. This is because most QR codes are available in black and white mazes. However, this doesn’t have to be the case as there are other QR codes that are customized to look different.

There are two possible ways to customize QR codes.The first way is by adding an image or a company logo. The second way to customize a QR code is by adding some color and effect. Customizing a QR code does not only make it beautiful to look at, it also attracts more people to scan it. Learn how to create a QR code with an image.

Creating a QR code that has an image included in it quite easy. It is just like creating a normal QR code.

First of all, find a suitable QR code generator from the internet. The generator should be compatible with your operating system. Depending on the QR code type that you want to create, enter all the relevant data that you want to be contained in the QR code. If you so wish, you can include an image to your QR code or a company logo. You can also add some color and effect to the QR code. Click on the create QR code button. This will bring a preview of the QR code you have created. You can use a smartphone to scan your QR code to ensure that it is working before you download it and release it to the public.