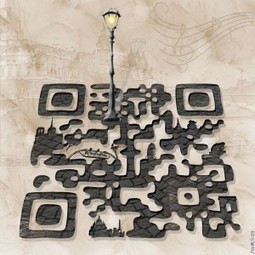 You might have heard that QR codes are going to become the next big thing, and you are probably asking yourself what exactly QR codes are. Quick response codes, mostly referred to as QR codes are two dimensional bar codes that are used to store different types of alphanumeric data. The information that is saved in QR codes is normally encoded, and can be decoded using QR code reading devices, and smartphones. Most of the time, the encoded data contained in QR codes links users directly to text messages, websites, email addresses, phone numbers and any other information that a QR code creator has encoded in the QR code.

In the 1990s, QR codes were only used in Japan. However, with the passage of time, QR codes have become more popular and are now being used in countries all over the globe. They are mostly used by business owners for marketing.

Set the options and enter the data that you would like to be included in the QR code. An example of the data that can be included in the QR code is the URL of a website, an email address, a text message, contact information among other types of information that you wish to include in the QR code. Generate the QR code by clicking on the “create” button. By doing so, you will be able to see a preview of your QR code. Finally download the QR code or print it on items of your choice. It can be a cup, a t-shirt, a business card or any other place that you would wish to have your QR code printed on. You can also choose to have your QR code printed on a billboard, or on company booklets.

You can use the following QR code file formats while creating a QR code: